It's a Thanksgiving Day tradition, not only for New York but for a TV-watching nation as well: the Macy's Thanksgiving Day Parade. In 2018, it will start at 9 a.m. ET, Thursday, November 22, and Macy's says there's two and half miles of public viewing along the route.

Here are six fun historical facts about the parade according to CNN:

1. It was originally a Christmas parade
The original store was about 20 blocks south on Sixth Avenue near 14th Street. Macy's has been at its current flagship location, at Broadway and 34th Street, since 1902. Continuing expansion made the location what Macy's called the "world's largest store," an entire city block with more than 1 million square feet of retail space.
In celebration, employees organized a Christmas parade in 1924 featuring "floats, bands, animals from the zoo and 10,000 onlookers," according to a Macy's history page. It also started way up at 145th Street. The parade concluded with Santa Claus and the unveiling of the store's Christmas windows. Three years later, the Christmas Parade was renamed the Thanksgiving Day Parade.
Macy's didn't invent the practice. Philadelphia has the oldest Thanksgiving Day parade: Its Gimbels Thanksgiving Day Parade, now the 6ABC - Dunkin' Donuts Thanksgiving Day Parade, debuted in 1920. 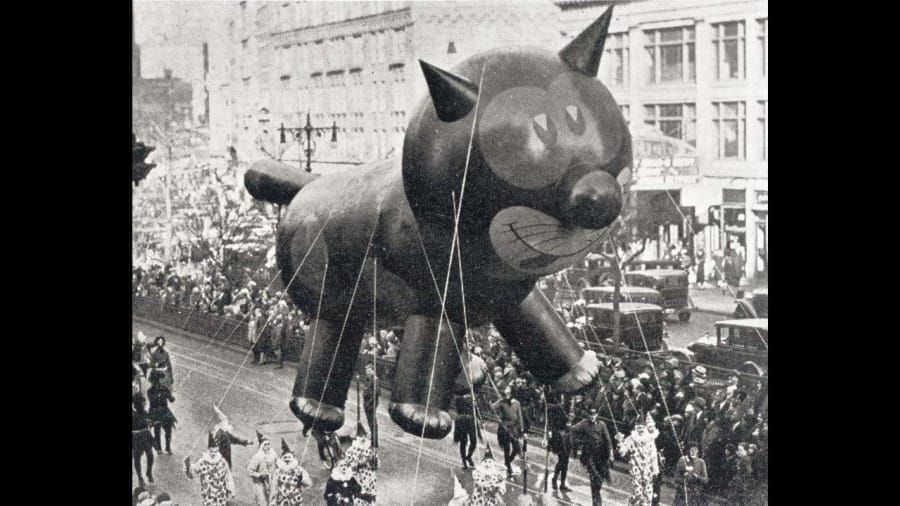 2. The balloons have been around almost since the beginning
According to Mental Floss, the balloon attractions debuted in 1927, inspired by a balloon float. Even then, they were massive -- one was a 60-foot dinosaur -- and, in those days, they had more to deal with than just high winds and crazy weather: Until 1938, an elevated train ran down Sixth Avenue.

Well-known characters have been part of the parade since that 1927 outing. Felix the Cat was there from the beginning, and Mickey Mouse joined in 1934, the same year that featured a balloon based on popular entertainer Eddie Cantor. "Peanuts" characters, especially Snoopy -- who made his first appearance in 1968 -- are regular visitors.
One tradition didn't last long. The balloons were originally allowed to float away, and those who found them got a gift certificate from Macy's. 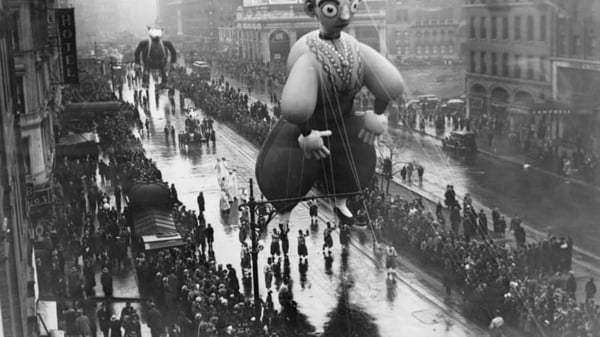 4. Fans can watch the balloons get inflated
It's hard to keep things hidden on an island as cramped as Manhattan, and the Macy's balloons are no exception. They're inflated at a staging area at 77th Street and Central Park West, near the American Museum of Natural History. For many families, watching the balloons get ready is just as much a tradition as the parade itself.

The balloons are constructed at Macy's Parade Studio in Moonachie, New Jersey. Macy’s balloon designers—dubbed “balloonatics”—begin up to a year before the parade with pencil sketches of each character, analyzing not just aesthetics but also aerodynamics and engineering. The sketches are followed by scaled-down clay models that are used to create casts of the balloons. Two miniature replicas are created: One that’s marked with technical details, and one that’s painted in the balloon’s colors. The models are immersed in water to figure out how much helium they’ll need to float.

Finally, the schematics are scanned by computer, and the fabric pieces are cut and heat-sealed to create the various air chambers of the balloon. Once the balloon is created, it's painted while inflated (otherwise, the paint will crack), then undergoes leak testing and indoor and outdoor flight tests. No wonder it costs at least $190,000 for a first-time balloon (after a first appearance, it costs $90,000 a year after that). The balloons are completed by Halloween and stored along a wall in the design studio's balloon warehouse.

5. The route has changed over time
For years, the parade's Midtown route went right down Broadway, Manhattan's spine. But in 2009, the route was moved to Seventh Avenue because of new pedestrian plazas along Broadway. It was changed to Sixth Avenue in 2011. Given the parade's draw as a tourist attraction, this did not go over well with some folks.

The balloons are directed by balloon pilots.They’re the people walking backwards in front of the balloon, directing a crew of volunteers holding guide ropes (called “bones”) and two Toro utility vehicles. Macy’s offers training three times a year for pilots. “We offer the pilots and captains the chance to go around the field a couple times with the balloon a couple of times and practice the instruction and guidance,” Kelly Kramer, a longtime Macy’s employee and balloon pilot, told Vanity Fair in 2014. “We also have classroom training.” It’s also important for balloon pilots to train physically; if not, “The next morning you wake up and you almost cannot get out of bed because your calves seize up,” Kramer said. “I walked backwards in my neighborhood at night.” 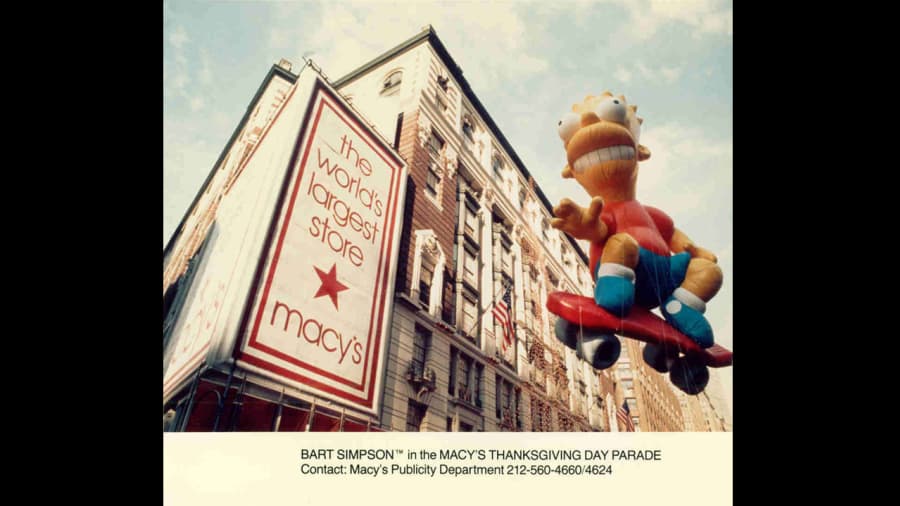 6. It hasn't always gone well
It looks so nice on television, doesn't it? But late November in New York can be dicey. In 1957, a wet day got wetter for people near a Popeye balloon: The character's hat filled with water and drenched parade watchers. The same thing happened in 1962 with a Donald Duck hat.  Superman once lost his arm to tree branches.

But the worst was probably 1997, a blustery day in the Big Apple. During that parade, winds reached more than 40 miles per hour, and the balloons were difficult to control. One balloon struck a lamppost and injured four people; one woman was in a coma for a month. The Pink Panther threatened a woman holding its ropes. "The balloon was caught on top of me and my daughter," she told The New York Times. "We thought it was going to smother us."

What are Helium or Floating Inflatables?
TallMan.Promo has proudly produced our custom inflatables for a variety of purposes for many satisfied clients. Our balloons are used to catch the eye, to relay a message, and to get your business, organization, product or special event the attention it deserves! We can match your ideas with our expertise to find the right inflatable for you.

Floating inflatables are very light airtight inflatables.  They will float in the air once they are filled up with helium. In order to float they are often made from a very light PVC material. Complex designs require a lot of material that needs to be off set by the volume of helium. There the more complex the design, the larger the inflatable model needs to be in order to float. We do not recommend the use of floating inflatable balloons for long term usage as they cannot be used in weather conditions with a lot of rain or wind.

They are very impactful, but are only for short term, managed use. Due to the light material, it is easy to puncture them.  In combination with the fact that in very windy weather you might not be able to use them at all, they are not a popular choice.

Types of Parade Inflatables
The Macy's parade is unique in the world. We have clients asking about similar parade inflatables, but often the  cost and availability of helium and risky nature of the balloons will steer them towards a cold air inflatable that placed placed on a wagon or back of a truck.

About TallMan.Promo Inflatables
Our products range from small point-of-sale inflatable, to inflatable tents to giant rooftop inflatables that are more than 100 ft. tall. We have extensive experience working with clients from design phase to completion to find the exact size and shape of finished products to bring your message home. We have produced hot air balloon style inflatables, animals, musical-themed inflatables, archways, custom-made tents – nearly every size and shape is possible or we can suggest options. Please see this FAQ section for more technical info on the various types of helium inflatables.

For more information on our inflatable parade projects and helium balloon options, feel free to check our site or contact one of our representatives.